Warning: "continue" targeting switch is equivalent to "break". Did you mean to use "continue 2"? in /home/leofxio/congruityindia.com/wp-content/plugins/revslider/includes/operations.class.php on line 2758

Warning: "continue" targeting switch is equivalent to "break". Did you mean to use "continue 2"? in /home/leofxio/congruityindia.com/wp-content/plugins/revslider/includes/operations.class.php on line 2762

Warning: "continue" targeting switch is equivalent to "break". Did you mean to use "continue 2"? in /home/leofxio/congruityindia.com/wp-content/plugins/revslider/includes/output.class.php on line 3706
 P A SYSTEMS – Congruity India
HomeP A SYSTEMS

A public address system (PA system) is an electronic system comprising microphones, amplifiers, loudspeakers, and related equipment. It increases the apparent volume (loudness) of a human voice, musical instrument, or other acoustic sound source or recorded sound or music. PA systems are used in any public venue … 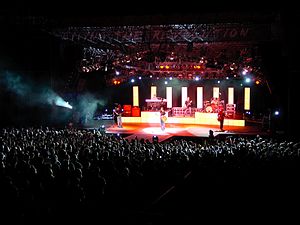 A sound reinforcement system is the combination of microphones, signal processors, amplifiers, and loudspeakers in enclosures all controlled by a mixing console that makes live or pre-recorded sounds louder and may also distribute those sounds to a larger or more distant audience. In many situations, a sound reinforcement system is also used to enhance or alter the sound of the sources on the stage, typically by using electronic effects, such as reverb, as opposed to simply amplifying the sources unaltered.

A sound reinforcement system for a rock concert in a stadium may be very complex, including hundreds of microphones, complex live sound mixing and signal processing systems, tens of thousands of watts of amplifier power, and multiple loudspeaker arrays, all overseen by a team of audio engineers and technicians. On the other hand, a sound reinforcement system can be as simple as a small public address (PA) system, consisting of, for example, a single microphone connected to a 100 watt amplified loudspeaker for a singer-guitarist playing in a small coffeehouse. In both cases, these systems rein force sound to make it louder or distribute it to a wider audience.

Some audio engineers and others in the professional audio industry disagree over whether these audio systems should be called sound reinforcement (SR) systems or PA systems. Distinguishing between the two terms by technology and capability is common, while others distinguish by intended use (e.g., SR systems are for live event support and PA systems are for reproduction of speech and recorded music in buildings and institutions). In some regions or markets, the distinction between the two terms is important, though the terms are considered interchangeable in many professional circles.